Electroluminescence (EL) is an optical phenomenon and electrical phenomenon in which a material emits light in response to the passage of an electric current or to a strong electric field.

Electroluminescence is the result of radiative recombination of electrons and holes in a material, usually a semiconductor. The excited electrons release their energy as photons - light.

What is EL film? 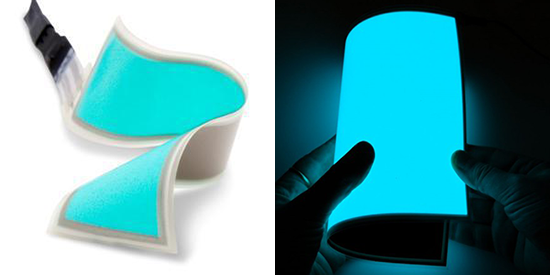 An EL film is actually a lamp, it emits light, but it is unlike any traditional light. Instead of creating light by heating a filament (as in an incandescent light bulb) or by charging a gas field (as in a fluorescent or neon tube), EL relies on phosphorescent materials which glow when exposed to a small electrical current.

EL film is cool, low power and emit a soft light without any irritating glare. It is invariably very thin, almost like ribbon or sheet of paper, and it can be produced in a variety of colors. The brightness of the surface appears the same from all angles of view.